It’s November 15, 1980. Ronald Reagan has just won the presidential election, so the Carter administration is coming to an end. Elliott Gould is hosting his 5th episode of Saturday Night Live… the first of season 6. Big changes are starting with new writers and cast members… and a wider variety of musical acts. Tonight’s musical guest is “Kid Creole and the Coconuts”.

Did I see this episode in its first run? I honestly can’t remember. Elliott Gould was a popular host, so it may have been a rerun in later years when I first saw this episode. Whatever the case, I instantly became a fan of KC&tC. “Mister Softee” and “Grace of God” were never to be found on my radio, but I wanted more than the memory of seeing them live from New York late one Saturday night.

Kid Creole and the Coconuts was not built for the era before music videos. I’ll link you to some concert footage in the comments and you’ll see what I mean. Hot Latin rhythms, sharp threads, and the simply-yet-effectively-choreographed (but way more than just visually stunning) backup singing Coconuts. A party band experience a la The New York Dolls, with the stage-filling energy of a Miami Sound Machine. Imagine Lou Bega and The Spice Girls had a bunch of children. And those kids started a band. That’s Kid Creole and the Coconuts.

Musically, this isn’t even Kid’s best work, but the opening track, “The Lifeboat Party,” is a banger! And Island Records didn’t put out discs in the early 80s just to fill slots in record stores. If you dig Desi Arnaz, Tito Puente, and Celia Cruz, there is plenty here to enjoy, while waiting for the torch to be passed to Gloria Estefan and the soundtrack from Jim Carrey’s “The Mask”.

Side one has fun, and invites you along. The Coconuts get their turn on the lead mic on “Distractions”, and prove they have the skills to do more than shake in triplicate. August “Kid Creole” Darnell has plenty of vocal power to front the other tracks’ fully-orchestrated brass and percussion licks.

Side two turns up the heat like you might expect in a South Beach nightclub. The Cuban influences are more focused here, and the “feel good” lyrics from side one (which border on silly in “If You Wanna Be Happy”) give way to some more socially observant fare in side two’s “There’s Something Wrong in Paradise” and “It’s a Wonderful Life.” Daryl Hall lends a hand on “Bongo Eddie’s Lament,” and we’re all left playing Six Degrees of Separation to figure out how THAT collaboration came about. By the time you get to the closing track, “Seven Year Itch,” you might just believe it’s 3AM and you have to walk the palm-tree-lined streets back to your hotel on the beach… after one more dance under the lights.

This isn’t a set to spin when you have no intention of getting out of your recliner. Expect the kids to bounce around with a stuffed animal dance partner. This one is from an era when an album was an opportunity to tell a story, and Doppelgänger tells a cogent story – both in the tracks and on the liner notes!

If you were a cool jazz fan, and I told you that I had a recording of a combo including Gerry Mulligan on sax, George Duvivier on bass, and Bill Mays on keys, and guest vocal performances by Sarah Vaughn and Mel Torme, you might say “Hey, that sounds pretty good.”

Now imagine the front man for that combo is Barry Manilow.

The two sides of the record are called “Set 1” and “Set 2,” and that’s how they play, like cocktail lounge sets. There are instrumental segues between the tracks that smell like cigarettes and cheap liquor, so that each side is about 20 minutes of continuous performance. The accomplished jazz musicians take turns with improv licks around Barry’s vocals. In Set 1, Sarah Vaughn steps in to duet on “Blue”. On the flipside, Mel Torme shines on the beautifully simple “Big City Blues”. Those two performances are worth the purchase, but “What Am I Doin’ Here” stands as a powerful opener for the second set to go beyond the “Is that really Manilow?” mystique.

Some of the chords seem unnecessarily forced to sound so jazzy they force you to consider the “anti-Manilow” depth of the performance, but there is nothing experimental about this jazz offering. It’s exactly what you’d expect from that hot little club just far enough from the tourist spots and the airport to remain a locals’ secret, where pros still show up occasionally to remember what it was like before they were packing serious concert halls.

Not to diminish Manilow’s performance at all. He’s got the chops to stay in these careful selections. And the result is a nice way to spend 45 minutes in your easy chair, late at night, and have another scotch-on-the-rocks to wash away the hassles of the daytime. 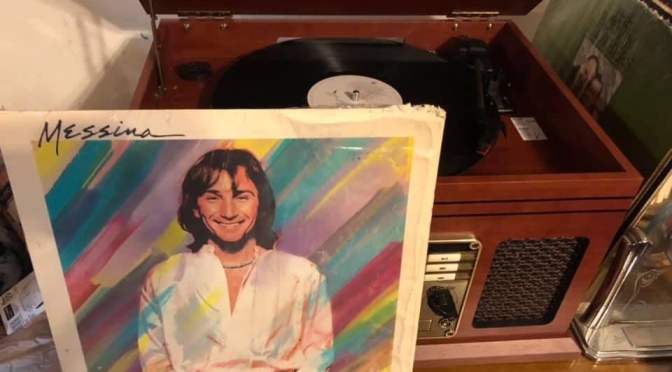 I really like this Messina disc, but it’s so all over the place. It’s Messina, but it’s also got tracks that are uncharacteristically disco influenced. And some latin flavored bits? But the folksy roots are still there, and “Child of My Dreams” and “Whispering Waters” stuck hard in my brain since I first bought a cassette of this one from a bargain bin at Camelot Music in the mid-to-late 80s.

“Money Alone” is a ripper, with some funk undertones that don’t feel out of place at all. You won’t remember any of this disc from hearing it overplayed on the radio, but once you give this collection a full hearing, you’ll want to keep it handy for the occasional long car ride or background music for a hobby project.

A space for what makes me laugh, cry, and think.

My new podcast about all things education and technology!